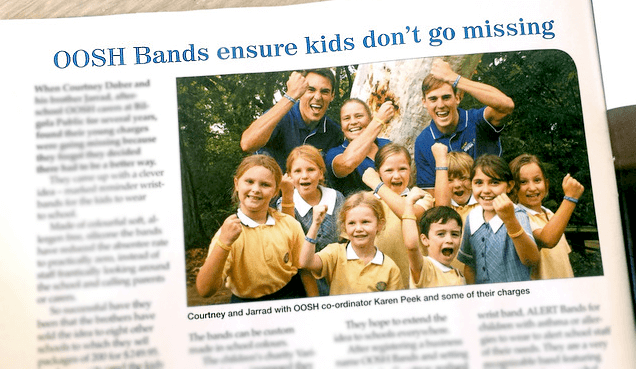 CleverDux began life as ‘OOSH Bands’ back in 2014 when founder and CEO Courtney Dober was working in childcare and consistently presented with a recurring problem – forgetful children. Children who we’re booked into the after school care facility that Courtney worked at would often forget about their booking and wander down to a meeting point out the front or back of the school or even walk home, only to find no one was there to meet them… This caused chaos for Courtney who, when marked the role, found to have, on average, 3 to 4 children missing! (From a center that only catered for 30 kids) It’s also worth noting that getting 30 kids of all ages into a common room and seated to mark the role after they’ve finished a school day isn’t the fastest process! Lots of time passed before these missing children were found… So, as a qualified Industrial Designer, Courtney knew he needed to develop a better solution… a system that would remind children to come and eliminate forgetfulness. So he did. He designed ‘Reminder Bands’. Silicone wristbands that had “I’m going to OOSH today!” written on them in the colors of the school uniform to seamlessly blend in so as not to disrupt the regular “no jewelry” policy. Children would wear the bands on the days they were booked in to After School Care and be consistently reminded, as would teachers and other students. They worked! Teachers loved them, kids loved them and parents loved not being called in the afternoon asking where their child was because they hadn’t turned up to after school care!

Soon after the system was in place, and recording 100% success rate, other childcare workers and parents from neighboring schools were asking about the wristbands and proclaiming the same recurring issues. The next thing you know, Reminder Bands are in over 500 schools across Australia and ‘OOSH Bands’ was born.

As fast as the business was born so was the realization that not every centre was an OOSH… the name was changed, CleverDux was born and ‘Custom Wristbands’ were added to the catalogue catering for centres that wanted their own name, logo and phone number added.

Since that time CleverDux has addressed multiple other significant issues faced by childcare workers and teachers like the recognition and correct treatment of children’s medical conditions that can, far too often, have catastrophic results. This was the unfortunate case with Marcus Terranova, only an example of how tough it can be and the core reason CleverDux developed the See & Save System.

Today CleverDux continues to design and develop simple yet innovative solutions to problems faced by carers across all situations.

If you have experienced an issues that needs a solution, let us know! We love working with people who face these issues but don’t know where to start.